The writers at Monocle, and especially Tyler Brûlé, like to indulge themselves in fantasy efforts about the perfect spa, the perfect neighborhood, the perfect cruise liners, the perfect news broadcaster… you name it. Considering their love for airlines and airports, one of their more obvious inclinations is devising the perfect airline, as they did last month (June 2010) with the Nippon Nordic Air (last issue #34) .

This month, on the Monocle Mediterraneo newspaper, Tyler Brûlé shares his thoughts about a new cross-Mediterranean airline, aptly called the “Phoenician airline”: 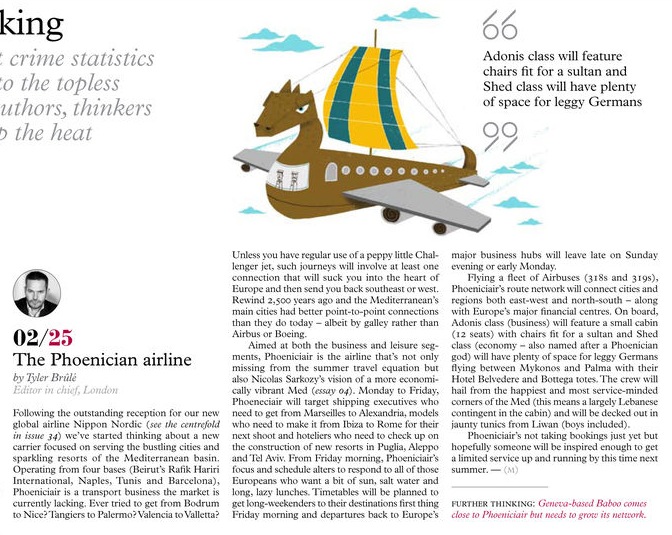 Following the outstanding reception for our new global airline Nippon Nordic (see the centrefold in issue 34) we’ve started thinking about a new carrier focused on serving the bustling cities and sparkling resorts of the Mediterranean basin. Operating from four bases (Beirut’s Ralik Hariri International, Naples, Tunis and Barcelona), Phoeniciair is a transport business the market is currently lacking. Ever tried to get from Bodrum to Nice? Tangiers to Palermo? Valencia to Valletta? Unless you have regular use of a peppy little Challenger jet, such journeys will involve at least one connection that will suck you into the heart of Europe and then send you back southeast or west. Rewind 2,500 years ago and the Mediterranean’s main cities had better point-to-point connections than they do today – albeit by galley rather than Airbus or Boeing.

Aimed at both the business and leisure segments, Phoenician is the airline that’s not only missing from the summer travel equation but also Nicolas Sarkozy’s vision of a more economically vibrant Med (essay 04). Monday to Friday, Phoeneciair will target shipping executives who need to get from Marseilles to Alexandria, models who need to make it from Ibiza to Rome for their next shoot and hoteliers who need to check up on the construction of new resorts in Puglia, Aleppo and Tel Aviv. From Friday morning, Phoenician’s focus and schedule alters to respond to all of those Europeans who want a bit of sun, salt water and long, lazy lunches. Timetables will be planned to get long-weekenders to their destinations first thing Friday morning and departures back to Europe’s major business hubs will lease late on Sunday evening or early Monday.

Flying a fleet of Airbuses (318s and 319s), Phoenician’s route network will connect cities and regions both east-west and north-south – along with Europe’s major financial centres. On board, Adonis class (business) will feature a small cabin (12 seats) with chairs fit for a sultan and Shed class (economy – also named after a Phoenician god) will have plenty of space for leggy Germans flying between Mykonos and Palma with their Hotel Belvedere and Bottega totes. The crew will hail from the happiest and most service-minded corners of the Med (this means a largely Lebanese contingent in the cabin) and will he decked out in jaunty tunics from Liwan (boys included). Phoenician’s not taking bookings just yet but hopefully someone will be inspired enough to get a limited service up and running by this time next summer.